Preserving Ancient America’s Finest Sculptures
Deep in the Guatemalan forest, in an ancient Maya city, a team of archaeologists discovers artifacts such as thrones, altars, and tables and transports them to American museums.
The Maltese Islands: Cicero’s Land of Honey and Roses, and Stronghold of the Knights, Again Is Focus of Naval Strategy
Though one of the smallest archipelagos in the world, these three inhabited islands situated between Sicily and North Africa offer some of the finest harbors in the world.
Open- Air Law Courts of Ethiopia
Unusual photographs reveal the emotions of Ethiopians as they debate in informal, outdoor law courts.
The Suez Canal: Short Cut to Empires
First opened in 1869, the Suez Canal cuts through 104. 5 miles of northern Egypt, connecting the Mediterranean to the Red Sea and the East.
The Mist and Sunshine of Ulster
While most of Ulster is farmland, Northern Ireland’s capital, Belfast, is an industrial city specializing in shipbuilding and linen making.

Be the first to review “National Geographic November 1935” Cancel reply 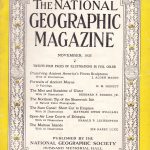