THE INCA: MACHU PICCHU SALUTES THE SUN(20 1/4 x 31 1/4 inches)
Included: Painting of Machu Picchu, one of a series of royal estates in the Urubamba Valley showing the narrow south gate, workers in the terraced fields, a warehouse, a sacred plaza near the Intiwatana ( the city’ s highest point) , canal and one of 16
THE INCA: AN EMPIRE AND ITS ANCESTORS(31 1/4 x 20 1/4 inches)
Included: Main map shows empire at greatest extent with Inca roads, routes of the conquistadores, battles, ceremonial centers, ethnic groups; inset maps trace early Andean cultures, early empire builders, the rise of new empires, and an archaeological gu

Be the first to review “National Geographic May 2002” Cancel reply 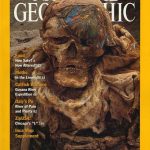