Heart of the Bluegrass
The rolling countryside radiating from Lexington, Kentucky, claims fame for its bourbon whiskey, its architecture, and mostly for its Thoroughbreds.
Nature’s Aquatic Engineers, Beavers { Beavers, Nature’s Aquatic Engineers}
Conservation and a change in fashion have helped bring back North America’s beavers. The authors photograph beavers underwater and within their dens.
Tanna Awaits the Coming of John Frum
Exemplifying the cargo cults that have sprung up across Melanesia since about 1940, Tanna island in the New Hebrides worships a mythical John Frum, who is expected to bring riches on his eminent return.
Spectacular Treasures From a Chinese Tomb { A Lady From China’s Past: A Noblewoman’s Last Day, 2, 100 Years Ago, Seems to Dawn Again With the Discovery of Her Richly Furnished Tomb}
Dating from 2, 100 years ago, a Han tomb excavated near Ch’ angsha has yielded silks, laquerware, musical instruments, and the well- preserved remains of a woman who may have been consort to an emperor.
The Incredible Universe
Scientists can now look to the far reaches of the cosmos. Their advances rest on centuries of observation by early astronomers and technological advances of today.
Amiable Amsterdam
Once Europe’s prime port, the Netherlands historic city displays a permissive but orderly culture and takes an oil embargo in stride.
Seven Men Who Solved Riddles of the Cosmos { Pioneers in Man’s Search for the Universe}
Seven men – – Copernicus, Galileo, Kepler, Newton, Herschel, Einstein, and Hubble – – solved many riddles of the cosmos.

Be the first to review “National Geographic May 1974” Cancel reply 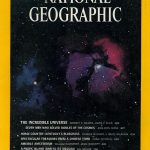