Split Seconds in the Lives of Birds: Color Film and High- speed Flash Stop Whirring Wings and Show Details Too Fast for Human Eyes to See
Advances in color photography, including the high- speed flash, have made it possible to capture on film the activities of birds, that humans would otherwise be unable to see.
The Goats of Thunder Hill: Forsaking City Streets for a Rural New York Retreat, Four Women Brave the Complications of a Cowless Dairy Farm
The author gave up city life to raise dairy goats at the Thunder Hill farm in upstate New York. Goats, as well as being prolific milk producers, regard fences as a challenge and shrubbery as a snack.
Rhododendron Glories of Southwest Scotland: Admiral Sir Frederick Dalrymple- Hamilton, of [ Bismarck] Battle Fame, Plays Host on a Tour of Floral Displays from Many Lands
Warmed by the Gulf Stream, the southwestern coast of Scotland plays host to many varieties of rhododendrons and azaleas.
We Captured a ‘ Live’ Brontosaur: Ancient Footprints in Texas Rock Bring to Life a Grim Prehistoric Drama and Help Answer a Tantalizing Scientific Riddle
Ancient footprints in Texas rock bring to life the struggle between the placid, plant- eating brontosaur and other carnivorous dinosaurs.
War and Quiet on the Laos Frontier: Everyday Life Goes On Unchanged Within Earshot of the Guns as French- led Forces Battle Reds in Indochina
After several years of civil war in Indochina, the people of Laos carry on with their lives within earshot of gunfire.
Honolulu, Mid- Ocean Capital: Oriental and Western Ways Blend Harmoniously in Hawaii’s Metropolis, Center of Industry, Bastion of Defense, and Tropic Playground
Asian and Western ways blend harmoniously in Hawaii’s metropolis. The city is not only a tourist mecca but a center of industry, and stronghold for the defense of the United States.

Be the first to review “National Geographic May 1954” Cancel reply 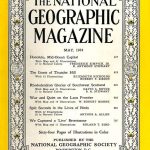