Cyprus, Idyllic Island in a Troubled Sea: Britain’s Eastern Mediterranean Base Has Known the Tramp of Many Armies, but Its Countryside Is Changeless
This small island in the Mediterranean has been a scene of contention for centuries. Now that it is a British protectorate, the culture and traditions of the Cypriots remain unchanged.
Thumbs Up Round the North Sea’s Rim: Northern Europe Shows Its Human Side to Two Girl Hitchhikers Touring Youth Hostels from Sweden to France
Two hitchhikers recount their adventures touring youth hostels from Sweden to France.
I Sailed with Portugal’s Captains Courageous
Following a tradition of 450 years, a fleet of Portuguese fishing vessels sets out each spring to fish the Grand Banks off Newfoundland.
The Making of a West Pointer: This Year the United States Military Academy Marks a Century and a Half of Training Men for Leadership
For 150 years, West Point has been the training ground for the military leaders of the United States.
Nature’s Tank, the Turtle: This Leisurely Armored Reptile Takes Everything in Its Slow Stride but the Automobile
Many varieties of turtles have armored shells to protect them from predators – – except from humans and their automobiles.

Be the first to review “National Geographic May 1952” Cancel reply 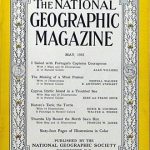