Bekonscot, England’s Toy- Size Town
A British man has spent six years creating a two- acre miniature town that delights tourists with its tiny churches, airports, trains, and windmills.
By Sail Across Europe
On a chain of rivers and canals, a newly married couple sail a Dutch cutter across Europe, from the English Channel to the Black Sea.
Butterfly Travelers: Some Varieties Migrate Thousands of Miles
Following instinct, butterflies such as the monarch may travel more than a thousand miles to lay their eggs.
The Isle of Man
Set like a jewel in the Irish Sea, the British Isle of Man, midway between England, Scotland and Northern Ireland, is dotted with castles, snug whitewashed cottages, and fields of flowers.
A Mexican Land of Lakes and Lacquers
These black- and- white photographs depict the Tarascan Indians – – farmers, fishermen, and metalworkers who live in Mexico’s state of Michoacan.
Memorial tribute
The National Geographic Society mourns the loss of Dr. Frederick V. Coville, a member of the Society’s Board of Trustees for more than 40 years.
Along London’s Coronation Route
Edward VII’s coronation on May 12 will be followed by a royal state coach procession along a six- mile course from Westminster Abbey to Buckingham Palace before the joyful crowds of London.

Be the first to review “National Geographic May 1937” Cancel reply 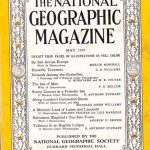