Planet of the Beetles
From humble ladybugs to brilliant scarabs, beetles both help and bedevil us. A third of the world’s identified insects are beetles, and they are everywhere.
America’s First Highway
The National Road, part of today’s U. S. Route 40, was built between 1811 and 1838 to connect the port of Baltimore to the Mississippi River.
The Rise of Life on Earth
Microscopic life- forms, our planet’s pioneer inhabitants, bequeathed the oxygen we breathe, the DNA and proteins that drive our cells, and the photosynthesis that feeds us.
Naples Unabashed
A city schooled in passion, chaos, and the art of making do, the Italian metropolis embraces its virtues and grapples with its problems – – without apology.
Marine Sanctuaries { Blue Refuges: U. S. National Marine Sanctuaries}
Charged with protecting U. S. ocean treasures, 12 national marine sanctuaries encompass 18, 000 square miles of coral reefs, elephant seal rookeries, kelp forests, and whale feeding grounds.
Nomads of the Arctic { Nenets: Surviving on the Siberian Tundra}
Having endured the communist collectivization of their reindeer herds, these nomads now face capitalist development of the huge gas fields underlying their pasturelands.

Be the first to review “National Geographic March 1998” Cancel reply 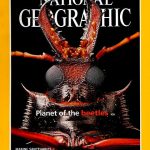