Herbs for All Seasons { Illustrations text}
From the kitchen and the chemistry lab, the farm and the pharmacy comes the perfume of an herbal renaissance. Lonnelle Aikman and Larry Kohl savor the plants’ reemergence. Photographs by Sam Abell.
Finding the Ghost Ships of War { Ghost Ships of the War of 1812: [ Hamilton] and [ Scourge] }
The armed U S. schooners Hamilton and Scourge, sent to the bottom of Lake Ontario by a sudden squall during the War of 1812, are discovered virtually intact – – the remains of lost crewmen still aboard. Daniel A. Nelson details the scientific detective s
They’ d Rather Be in Philadelphia
Quaker born and patriot bred, one of America’s most historic cities has suffered the slings and arrows of outrageous comedians. Yet Ethel A. Starbird and photographer Ted Spiegel discover that Philadelphia pride fills the hearts of countless citizens.
Etosha Park- -Africa’s Kingdom of Animals { Etosha: Namibia’s Kingdom of Animals}
At one of the world’s largest wildlife preserves, Douglas H. Chadwick documents the efforts of concerned officials to protect diminishing populations from the relentless encroachments of humankind. Photographs by Des and Jen Bartlett.
A Woman’s Icy Trial: 1, 000 Miles by Dogsled { Thousand- mile Race to Nome: A Woman’s Icy Struggle}
Susan Butcher recounts her trials – – and her triumphs – – along the length of Alaska’s Iditarod dogsled race. Photographs by Kerby Smith.

Be the first to review “National Geographic March 1983” Cancel reply 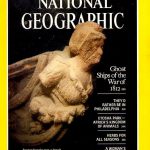