Waterway to Washington, the C & O Canal
National Park status assures maintenance for all 185- miles of this historic waterway and towpath, which begins in western Maryland.
Easter Week in Indian Guatemala
In Antigua, celebration centers on a daily seven- hour procession of villagers carrying a life- size Christ figure over a petal- strewn path.
La Gorce, John Oliver: Colleague of the Golden Years { Colleague of the Golden Years: John Oliver La Gorce}
The Society notes with sadness the passing of a remarkable editor and officer who served the Society for more than half a century.
The Night the Mountains Moved
A massive earthquake centered in Montana takes lives, forms a new lake, and gives birth to geysers in Yellowstone National Park.
Volcano and Earthquake Show Nature’s Awesome Power
The Editor lauds unprecedented photographic coverage of nature at its most powerful in two articles in this issue.
Fountain of Fire in Hawaii
Two thousand tremors in a single day tips off scientists who stand ready to record the eruption of Kilauea volcano.
Afoot in Roadless Nepal
Accompanied by a dozen porters, the author completes a survey for the United Nations in a country where outsiders have rarely been permitted outside the capital.

Be the first to review “National Geographic March 1960” Cancel reply 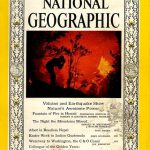