Peru Profits from Sea Fowl
Ocean currents bear plentiful food to Peru’s coastal islands, ideal habitat for countless seabirds whose waste is used as valuable fertilizer.
New St. Lawrence Seaway Opens the Great Lakes to the World
The most ambitious construction project since the Panama Canal promises to be an economic and engineering coup for the United States and Canada.
Children of the Sun and Moon
Some 400 Kraho indians cling to their ancient ways of hunting and gathering on the savannas of Brazil.
Life under Shellfire on Quemoy
Military watchdogs on this Nationalist outpost, scan for Communist artillery shelling from five miles away on mainland China’s shores, while islanders persevere with their daily routine.
Portugal’s Gem of the Ocean: Madeira
Some of the world’s highest sea cliffs rise to 2, 000 feet on an island where farmers have built terraces and canals to make the most of arable land.

Be the first to review “National Geographic March 1959” Cancel reply 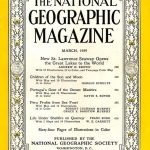