The Bird’s Year
Exotic birds and backyard favorites are featured in a look at bird behavior, including territorial defense, mating, and reproduction.
A Map Maker Looks at the United States
A National Geographic Society mapmaker surveys the United States from the air.
Alaska’s Automatic Lake Drains Itself
Lake George in Alaska fills and empties with the change of seasons.
Occupied Austria, Outpost of Democracy
Six years after the end of World War II, Austria remains divided into British, French, U. S. and Soviet zones, and serves as a buffer zone between democracy and communism.
Dog Mart Day in Fredericksburg
The dog mart is not only a dog auction, but a daylong celebration of all things canine, including obedience competition, a dog show, and a children’s dog parade.

Be the first to review “National Geographic June 1951” Cancel reply 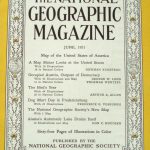