Lifelike Man Preserved 2, 000 Years in Peat: A Danish Bog Yields Remains of a Human Sacrifice That Helps Reconstruct the Life of Europe’s Ancient Tribes
A Danish bog yielded the remains of an Iron Age man, probably a sacrifice to the local gods. This discovery has provided many clues to the life of ancient European tribes.
The Greener Fields of Georgia: Dixie’s Empire State Turns Cotton Land to Pasture, Makes News with Pine, and Multiplies Its Industries
All over the South’s Empire State, agriculture advances along with industry. Yet in spite of all the changes and plans for tomorrow, echoes of an older and gentler way of life remain.
Night Life in the Gulf Stream: A Marine Pied Piper Lures Queer Creatures with a Light Bulb in Nocturnal Studies of Humble Dwellers in Warm Seas
A marine scientist lures a host of unusual creatures with a night- light in nocturnal studies of the inhabitants of the warm seas.
Shooting Rapids in Dinosaur Country: Daring River Rats Ride White Water Through Western Cliff Lands Where Now- extinct Reptiles Met a Mysterious End
The best way to see the canyons of Dinosaur National Monument is by boat. Not everyone chooses to see them by white- water raft down the Yampa River, as the author and his friends did.
Jamaica- -Hub of the Caribbean: Once a Haunt of Buccaneers, This Ever- Summer Isle Lures Vacationists and Prospers from Newly Exploited Aluminum Ore
Once a haven for pirates, this warm and summery tropical paradise lures tourists and prospers from newly exploited aluminum ore.

Be the first to review “National Geographic March 1954” Cancel reply 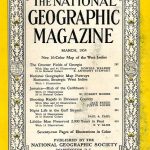