Barbados, Outrider of the Antilles: For 300 Years Fields of Sugar Cane, Rippling in the Trade Winds, Have Been This Caribbean Island’s Life
Barbados, a British colony for more than 300 years, is the most densely populated island in the Caribbean. Most of the island’s income comes from sugar.
Caught in the Assam- Tibet Earthquake: Record Shocks Dammed Rivers, Split Mountains, and Trapped Botanists in Rock- strewn Devastation for Three Months
The Assam- Tibet earthquake in the summer of 1950 destroyed houses, buried campsites, and devastated a wide area on the India- Burma- Tibet border. The author and his party, although not injured in the slides or floods, needed three months to return to s
Finding an Extinct New Zealand Bird: Rediscovered by a Persevering Doctor, the Flightless, Colorful Takahe, or Wanderer, Struggles to Survive
The flightless, colorful takahe, or wanderer bird was rediscovered. This bird was thought to be extinct but still requires protection and support in order to survive.
White Magic in the Belgian Congo: Tribesmen Mine Uranium, Run Machines, Study Modern Medicine as Booming Trade Opens Up the Vast Colony’s Resources
The Belgian Congo supports two societies: European and native. Both groups seek to develop the means and manpower to exploit the natural resources of the region to the fullest, and improve living conditions for all Congolese.
Work- hard, Play- hard Michigan
Michigan is a large and diverse state, home to many varieties of industry, and just as many areas for rest and recreation.

Be the first to review “National Geographic March 1952” Cancel reply 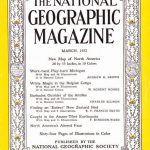