Ballooning in the Stratosphere: Two Balloon Ascents to Ten- Mile Altitudes Presage New Mode of Ae?rial Travel
Physics professor Auguste Piccard and his assistant, Paul Kipfer, conduct a series of airborne experiments in a bathysphere- style gondola suspended from a giant hydrogen balloon.
The Poland of the Present
Enjoying the fruits of postwar reconstruction, Poland competes with much of central Europe in urban development and economic growth while retaining a proud national culture.
Skiing in Switzerland’s Realm of Winter Sports
Schussing down sparkling white slopes, skilled skiers demonstrate elements of this quintessential Swiss activity.
Japan, Child of the World’s Old Age: An Empire of Mountainous Islands, Whose Alert People Constantly Conquer Harsh Forces of Land, Sea, and Sky
After several decades of rapid development Japan has joined the modern world with the same strength that it uses to meet the challenges of earthquakes, tidal waves, and volcanoes.
Motor Trails in Japan
The author opts out of the splendidly efficient railways in favor of driving across Japan, the better to capture the country on film.

Be the first to review “National Geographic March 1933” Cancel reply 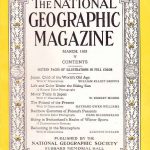