Holland’s War with the Sea
As much as 18 feet below sea level and lacking in timber, quarries, coal, or oil, the Netherlands’ extraordinary success illustrates the power of industry and perseverance in a nation whose colonial empire grew to fifty times its own area and seven times
Along the Old Spanish Road in Mexico: Life Among the People of Nayarit and Jalisco, Two of the Richest States of the Southern Republic
The oldest known road in North America runs from the Gulf of Mexico to Acapulco and San Blas on the Pacific. But the fertile lands around this former Indian trail are almost feudal in their administration. As the saying goes, The hacendado raises noth; i
The Wends of the Spreewald
Most of the Slavic colonizers of the German swamps are gone, but the small community that remains in this watery environment preserves its own culture, speech, and a diet of little except cucumbers and freshwater eels.

Be the first to review “National Geographic March 1923” Cancel reply 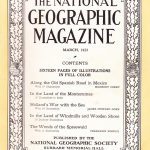