Last of the Black- footed Ferrets?
Among the rarest of North American mammals, these small, fierce hunters were pushed to the brink of extinction by settlers killing off their prey, prairie dogs. Now biologist Tim W. Clark has counted a small surviving population on the Wyoming plains. ;P
That Noble River, The Thames { The Thames: That Noble River}
Eyewitness to empire, England’s regal waterway has overcome pollution and neglect to become the world’s cleanest urban estuary, even as an innovative tide barrier tames its wilder urges and surges. By Ethel A. Starbird, with photographs by O. Louis Maz
Warriors From a Watery Grave { Warriors From a Watery Grave: Glorious Bronzes of Ancient Greece}
Submerged for centuries off the coast of Italy, two heroic bronze statues illustrate the highest attainments of Greek sculpture. Journalist Joseph Alsop reports.
Good Times and Bad in Appalachia: Wrestlin’ for a Livin’ With King Coal { Good Times and Bad in Coal Country; Wrestlin’ for a Livin’ With King Coal}
Like the mountains and valleys at the junction of Kentucky, Virginia, and West Virginia, the fortunes of the region rise and fall with demand for coal. Michael E. Long and photographer Michael O’ Brien chronicle the seesaw life of the past few years.
The Once and Future Universe
What was inconceivably small as long as 20 billion years ago is now inconceivably large, yet still growing at nearly the speed of light. Rick Gore reports on science’s latest discoveries. Photographs by James A. Sugar, paintings by Barron Storey, pictu;

Be the first to review “National Geographic June 1983” Cancel reply 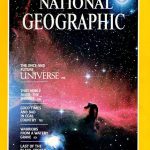