New Rush to Golden California: Vast and Varied, Our Fastest- growing State Reveals Its Wonders to Eastern Descendents of a Gold Rush Pioneer
From the giant redwoods to Yosemite’s cliffs, from the bustle of San Francisco’s Chinatown to that city’s great bridges, California is a state of superlatives. It is the fastest growing state in the United States, welcoming immigrants from the eastern
The Lure of the Changing Desert
Life in California’s desert areas is no longer parched and barren, thanks to modern irrigation techniques. The wildlife, however, has remained unchanged for centuries.
Twelve National Geographic Society Scientific Projects Under Way
In 1954, the National Geographic Society sponsored 12 different scientific projects, ranging from investigations of the planet Mars to anthropological studies of primitive tribes of Australia and New Guinea.
The Fabulous Sierra Nevada: Millions Each Year Find Challenge, Adventure, and Self- renewal in California’s Magical Mountains, Highest in the States
Each year millions of adventurous types find challenge, excitement, and perhaps self- renewal in California’s highest mountains. Years ago, gold was the lure, but today, travelers seek scenic beauty.
Sierra High Trip: Hikers Follow Flowery Trails in an Unspoiled Wilderness and Climb Over Snow and Rock to Mount Whitney’s Skyscraping Summit
Each summer, the Sierra Club High Trip takes climbers and hikers on a two- week trek through the Sierra Nevada mountains, to encourage people to learn about mountain country and to gain their help in conservation efforts.
Focusing on the Tournament of Roses: Pasadena’s 64- year- old Festival Ushers in the New Year with a Parade of Spectacular Floats Decked with Two Million Flowers
The Tournament of Roses is more than just a parade before a college football game. This 64- year- old festival in Pasadena, California offers 60 floats decked with more than two million flowers.

Be the first to review “National Geographic June 1954” Cancel reply 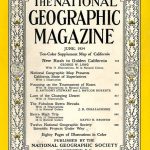