The West Through Boston Eyes
The American west is an overwhelming sight to eyes accustomed to the landscape of the eastern seaboard. Stewart and Helen Anderson and their cocker spaniel, Belinda, set off on a journey across the United States.
Italy Smiles Again
The former chief of the Allied military government in Italy returns to see what has happened after World War II troops departed. In spite of overpopulation and chronic shortages of some items, Italy appears to be back on the road to prosperity.
Menhaden- -Uncle Sam’s Top Commercial Fish
Menhaden are known by many names, including alewives, bugfish, bonyfish, and bunker. These herring are the basis of the U. S. commercial fishing industry.
Newfoundland, Canada’s New Province
Newfoundland is Canada’s tenth province. This rugged land adds thousands of miles to Canada’s eastern coastline and supplies forest products, minerals, and fish.

Be the first to review “National Geographic June 1949” Cancel reply 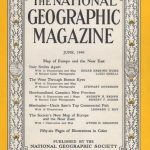