Budapest, Twin City of the Danube
The bridge- linked capital of Hungary offers grand views from either side of the river of such sights as the Parliament House, Coronation Church, and Royal Palace amidst a mixture of Byzantine, Gothic, Renaissance, and modern architecture.
Flying the World: In a Homemade Airplane the Author and Her Husband Enjoy 16, 000 Miles of Adventurous Flight Across Europe, Asia, and America
Aloft in the Errant, their self- built ship, an American couple sees popular sights from above on an eight- month global tour.
Hungary, a Kingdom Without a King: A Tour from Central Europe’s Largest Lake to the Fertile Plains of the Danube and the Tisza
Despite the loss of two- thirds of its area in the World War, Hungary survives and thrives due in part to its resilient people, who raise livestock and plant crops as their ancestors did.
Surveying Through Khoresm: A Journey into Parts of Asiatic Russia Which Have Been Closed to Western Travelers Since the World War
Under contract with the Soviet government, an American engineer investigates the region south of the Aral Sea, possibly salvageable as farmland.
Raft Life on the Hwang Ho
Chinese entrepreneurs float cargo on homemade rafts down a 700- mile stretch of the temperamental Hwang Ho, or Yellow River, perpetuating a centuries- old trading pattern.

Be the first to review “National Geographic June 1932” Cancel reply 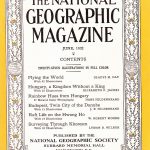