Capri, the Island Retreat of Roman Emperors
The ancients had to resist the sirens’song, but such is Capri’s visual beauty that he who would escape the lure . . . should bandage his eyes.
The Splendor of Rome
The landmarks and historical glory of the Eternal City are described in detail. Though impoverished by war the Rome of the future will far outshine the glories of the old.
Constantinople Today
Soon this one- time Queen City of the East will be replaced by a modern European center of business and commerce, says the author. Alas, It will be a clean, decent, civilized city – – but no longer Constantinople.
The Far Eastern Republic
The Soviet Union’s Far East is a harsh, raw land where hardship and poverty exist in every home.
The National Geographic Society’s Memorial to Peary { A Memorial to Peary: The National Geographic Society Dedicates Monument in Arlington National Cemetery to Discoverer of the North Pole}
A great white granite globe honoring the man who reached the top of the world was dedicated to the Society on the 13th anniversary of Adm. Robert E. Peary’s trip to the North Pole.

Be the first to review “National Geographic June 1922” Cancel reply 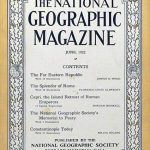