The sacred city may have engineered its own downfall

Manta rays in the Maldives are frenzied feeders

Be hypnotized! Gawk at cows! Indulge in fried Coca-Cola!

Land of Lord of the Rings

The fire and ice of a New Zealand park starred in the movie.

They look at Kosovo with regret – and to Europe with hope.

Be the first to review “National Geographic July 2009” Cancel reply 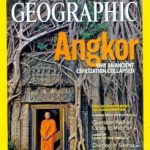