New Zoos- -Taking Down the Bars
Amid public clamor over the plight of animals, zoos are being transformed from menageries to modern arks. Innovative exhibits and breeding programs bring praise – – and new concerns.
Cyprus: A Time of Reckoning
Long- standing rivalry between Turkish and Greek Cypriots threatens to erupt again on this sun- drenched Mediterranean island as the UN weighs cutbacks in its peacekeeping forces.
Lightning, Nature’s High- voltage Spectacle
Striking the earth a hundred times each second, the torrent of electricity known as lightning can pack hundreds of millions of volts in flash – – energy that will likely remain forever beyond our reach.
Northern California { California’s North Face}
Grand convergence of ocean, mountain, and forest, northern California has everything but crowds. A double- sided map supplement on the entire state reveals its star qualities.
Saving Siberia’s Tigers
Rescued by a Russian- U. S. study team, two orphaned tiger cubs find asylum at the Omaha zoo. Near Vladivostok the researchers fight to save the last habitat of the world’s largest cats.

Be the first to review “National Geographic July 1993” Cancel reply 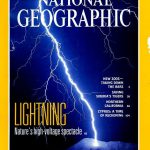