What’s Killing the Palm Trees?
A disease called lethal yellowing is destroying the coconut palms of the Western Hemisphere, says plant pathologist Randolph E. McCoy. With photographs by Guillermo Aldana E.
Acts of Faith in Chile { Chile: Acts of Faith}
Chileans will soon decide in a plebiscite whether to continue a swing to the political right led by Augusto Pinochet. Allen A. Boraiko and photographer David Alan Harvey descirbe a nation weighing its choices.
Catastrophe at Kourion { The Day the World Ended at Kourion: Reconstructing an Ancient Earthquake}
On July 21 in A. D. 365 an earthquake brought death and destruction to a city on Cyprus. Archeologist David Soren and his team, using computer graphics, dramatically re- create the scene of personal tragedy. Photographs by Martha Cooper.
Atlanta on the Rise { Atlanta: Energy and Optimism in the New South}
Host to this month’s Democratic Convention, the capital of Georgia has evolved from Civil War casualty to premier city of the Southeast, an exciting business and cultural center. Erla Zwingle and photographer Jim Richardson report on a modern- day resur
When the Moors Ruled Spain
Their 800- year dominance ended in 1492 with expulsion by Columbus’s benefactors, Ferdinand and Isabella. The heritage left behind still enriches the country, Thomas J. Abercrombie and photographer Bruno Barbey discover.

Be the first to review “National Geographic July 1988” Cancel reply 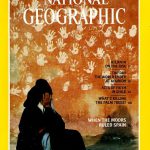