New Guinea Festival of Faces
Some 60, 000 tribesmen in elaborate finery gather for a sing- sing at an annual agricultural fair organized by Australian administrators for educational purposes.
San Diego, California’s Plymouth Rock
Ringing a southern California bay, the city celebrates the 200th anniversary of the day when Spanish Father Junipero Serra dedicated California’s first mission and its first European settlement.
Switzerland, Europe’s High- rise Republic
The diverse Swiss are split among Swiss German, French, and Italian and between Catholics and Protestants, but most agree that it’s good to live small and think big to make the best of a challenging Alpine environment.
World’s Last Salute to a Great American
In three days of rites, leaders from around the world joined Americans in honoring Dwight D. Eisenhower in Washington, D. C. , and his boyhood home of Abilene, Kansas.
The Eisenhower Story
The General of the Army who became U. S. President lived through three generations of American history – – and often helped shape it.
The Osprey, Endangered World Citizen
Naturalists witness the hunting and nesting techniques of the fish hawk whose wide range is in trouble.

Be the first to review “National Geographic July 1969” Cancel reply 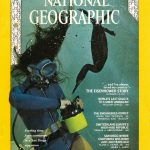