Triumph on Everest { Siege and Assault}
This is part one of the saga Triumph on Everest. In this installment, Brig. Sir John Hunt describes the preparations and initial assault on Mount Everest, from the base camp to the South Peak.
Triumph on Everest { The Conquest of the Summit}
In part two of Triumph on Everest, Sir Edmund Hillary describes how he and Tenzing Norgay braved altitude sickness, oxygen deprivation, and extreme cold to reach the summit of Mount Everest.
To the Depths of the Sea by Bathyscaphe: In the French Navy’s Balloon of the Deep, Marine Explorers Enter a Purée of Living Creatures and Sight Strange White- eyed Sharks in the Eternal Night of 4, 000 Feet
A bathyscaph operates like an underwater hot- air balloon. In this prototype developed by the French Navy and Capt. Jacques- Yves Cousteau, divers descend 2. 5 miles below the surface of the ocean to study marine life at close range.
New Miracles of the Telephone Age: Communications Have Just Taken One Forward Step by Adding Sight to Sound. Now the Future Promises Even More Startling Changes
The tiny transistor, invented by the scientists at Bell Telephone Laboratories in 1948, will eventually replace vacuum tubes in most types of electronic equipment. Scientists say it will revolutionize communications, at a moment when other technologies a
Two and a Half Miles Down: Even at the Greatest Depth in the Sea Ever Reached by Living Man the Bathyscaphe’s Crew Finds Abundant Signs of Life
An account of the deepest dive of the bathyscaph by one of her two- man crew. Even at great depths, the ocean teems with life, including the occasional shark.
Gilbert Grosvenor Is Elected Chairman of the Board, John Oliver La Gorce Chosen President and Editor of the National Geographic Society
Gilbert H. Grosvenor, President and Editor of the National Geographic Society, retires to become the Society’s Chairman of the Board of Trustees.
President Eisenhower Presents the Hubbard Medal to Everest’s Conquerors
President Eisenhower follows a precedent set by seven previous Chief Executives and bestows the National Geographic Society’s highest honor, the Hubbard Medal, on Sir Edmund Hillary and Brig. Sir John Hunt, leader of the British Everest Expedition.
Everyone’s Servant, the Post Office: Deluged by Record Mail Volume, the Postal Service Streamlines Its Operations and Speeds Delivery With New Techniques
Deluged by a record mail volume of 54 billion pieces, the Postal Service streamlines its operations and speeds delivery with new techniques.

Be the first to review “National Geographic July 1954” Cancel reply 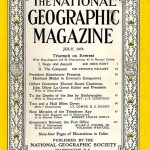