Gloucester Blesses Its Portuguese Fleet: With Prayer and Pageantry, Venturesome Deepwater Fishermen Ask the Protection of Our Lady of Good Voyage
Every year the deep- sea fishermen of Gloucester, Massachusetts, assemble their vessels to be blessed and request the protection of Our Lady of Good Voyage.
The Ape With Friends in Washington
When the Wells family left Thailand, they left their pet gibbon, Bimbo, behind. Fifteen months later, she turns up as the latest acquisition of the National Zoo. At their reunion the little ape recognizes her old friends.
Current Scientific Projects of the National Geographic Society
Six major scientific undertakings are being carried out by the National Geographic Society and cooperating institutions during 1953, including a Sky Survey and undersea exploration by Jacques- Yves Cousteau.
Dublin’s Historic Horse Show: Horse Lovers on Both Sides of the Atlantic Hail This Annual Event on Ireland’s Green Old Sod
Each August thousands of horse lovers converge on Dublin to look at, and possibly purchase, horses. It’s the social event of the season.
Rip Van Winkle of the Underground: North America’s Much Misunderstood Insect, the Periodical Cicada, Emerges After 17 Years in the Earth for a Fling in the Sun
The periodical cicada emerges from its underground hiding place every 17 years to mate and greet the sun.
From America to Mecca on Airborne Pilgrimage: A Moslem Student at Harvard Business School Records Islam’s Sacred Rites in Color in the Interest of World Understanding
A Muslim student at Harvard Business School records the sacred rite of the hajj, or pilgrimage to Mecca, in the interest of aiding world understanding.
The Yankee Sailor Who Opened Japan: Commodore Perry and His Black Ships Changed the Course of History by Ending Japan’s Seclusion a Century Ago This Month
On July 14, 1853, Commodore Matthew Perry sailed his black fleet into a harbor south of Tokyo and opened Japan to the rest of the world. This article commemorates the hundredth anniversary of this historic event.
Climbing Our Northwest Glaciers
Climbing season, from June to October, brings thousands of enthusiasts to the Pacific Northwest in search of high- altitude adventure.

Be the first to review “National Geographic July 1953” Cancel reply 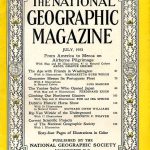