Birds on the Home Front
The indigenous birds of the United States include woodpeckers, hawks, owls, grebes, and orioles.
American Wings Soar Around the World: Epic Story of the Air Transport Command of the U. S. Army Is a Saga of Yankee Daring and Doing
In just two years, the Air Transport Command of the U. S. Army Air Forces blossomed into a force of brave pilots who crisscross the globe, flying supplies to countries such as Brazil and Morocco.
Aboard a Blimp Hunting U- boats: A Day above the Atlantic Reveals Navy Talk and Navy Ways, Creeping Convoys, and Torpedoed Wrecks
Ten men aboard a Navy blimp scan America’s Atlantic coast for enemy submarines.
The Heavens Above: On Land, Sea, and in the Air the Stars Serve Modern Man as Map, Compass, and Clock
Described here, the constellations from Aries to Orion are useful navigational tools.
Americans on the Barbary Coast
When Allied forces invaded Morocco and Algeria in November 1942, American soldiers were introduced to the Arab culture of North Africa.

Be the first to review “National Geographic July 1943” Cancel reply 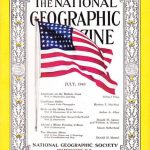