Boston Through Midwest Eyes
Polite, scholarly Boston boasts distinct ethnic neighborhoods peppered with Revolutionary War landmarks.
How Warwick Was Photographed in Color
Perched on the Avon River about eight miles from Shakespeare’s Stratford, England’s Warwick Castle contains many priceless paintings.
My Flight Across Antarctica
On his third attempt, Lincoln Ellsworth successfully completed the first flight across the continent of Antarctica, flying from the Ross Sea to the Weddell Sea in his 31- foot plane, the Polar Star.
Ellsworth Awarded the Hubbard Medal
On April 15, 1936, the National Geographic Society presented the esteemed Hubbard Medal for Heroic and Extraordinary Achievements in Arctic and Antarctic Exploration from 1926 to 1936 to polar explorer Lincoln Ellsworth after his historic flight across;
Down Idaho’s River of No Return
Navigating Idaho’s Salmon River, an expedition travels by wooden scow through a dramatic gorge deeper in some areas than the Grand Canyon.

Be the first to review “National Geographic July 1936” Cancel reply 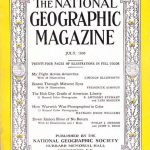