Seeking the Smallest Feathered Creatures: Humming Birds, Peculiar to the New World, Are Found from Canada and Alaska to the Strait of Magellan. Swifts and Goatsuckers, Their Nearest Relatives
The first in a series spotlighting the major bird families of North America focuses on humming birds and their kin, such as whippoorwills, nighthawks, and swifts, and provides color illustrations and biological details about many species.
The Perahera Processions of Ceylon
Kaleidoscopes of color, music, and dancing characterize the Perahera, a series of religious- based parades over ten nights initiated on the first night of a waxing moon.
The Feudal Isle of Sark: Where Sixteenth- Century Laws Are Still Observed
Inhabiting a bit of history in the middle of the English Channel, Sark’s residents pay no imperial taxes and allow no motor cars on their three- and- a- half- mile- long homeland.
Dismal Swamp in Legend and History: George Washington Owned Large Tracts in Region Which He Described as a Glorious Paradise
An expanse of wilderness on the border between Virginia and North Carolina, the Dismal Swamp deserves only part of its toxic reputation. A canal passes through, stubborn farmers plant crops in the peat soil, and the abundance of flowers along its edge ea
Colorado, a Barrier That Became a Goal: Where Water Has Transformed Dry Plains Into Verdant Farms, and Highways Have Opened up Mineral and Scenic Wealth
The lure of gold carved urban pockets from Colorado’s wilderness; now both mineral and agricultural resources contribute to a healthy economy.

Be the first to review “National Geographic July 1932” Cancel reply 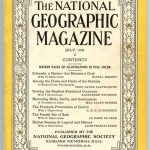