Gray Reef Sharks
Using body language to signal attack, the gray reef shark is one of the fiercest of its kind. Flotillas of these sharks patrol Bikini Atoll in the Pacific Ocean, once the site of U. S. atomic bomb tests.

Egypt’s Old Kingdom
New discoveries shed light on daily life in the age of the pyramid builders, when the task of serving the pharaohs, even after death, unified the land. A double map supplement reveals Nile Valley antiquities.
Australian Wildflowers
Land of kangaroo and koala, Australia also holds botanical treasures: the pink pigfaces, plume smokebushes, and 12, 000 other wildflower species that paint the west in glorious bursts of color.
Three Years Across the Arctic
By kayak, dogsled, and on foot, a young Spaniard and his friends test the limits of survival as they traverse 8, 400 harsh Arctic miles from Greenland to Alaska.
Offbeat New Orleans
Creole cooking, jazz rhythms, and the traditions of a storied past help override fears of drug crime and casino gambling. The soul of the Big Easy remains irrepressible.

Be the first to review “National Geographic January 1995” Cancel reply 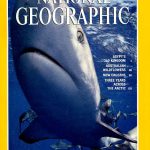