Des Moines Rides It Out { Riding Out the Worst of Times; Des Moines, Iowa: Riding Out the Worst of Times}
A native son returns to flood- ravaged Des Moines, Iowa, and finds its virtues of grit, good humor, and neighborly generosity holding fast.
The Great Flood of ‘ 93
When water rampaged through the upper Mississippi River basin last summer, it left both broken levees and broken hearts, stirring up a century- old debate on U. S. flood- control policy.
New Eyes on the Universe
With revolutionary telescopes and a fleet of spaceborne instruments, scientists are seeking farther, and more clearly, into the universe. Now they struggle to make sense of this extraordinary information.
Macaws: Winged Rainbows
Deep in the Peruvian Amazon, these largest of parrots gather to eat riverbank clay. Why they do so is one of the many questions explored in this first detailed study of macaws in the wild.
Kyushu: Japan’s Southern Gateway
Japan’s southernmost main island sheds its backwater image as it lures research labs and high- tech factories – – and claims its share of the Pacific Rim boom.

Be the first to review “National Geographic January 1994” Cancel reply 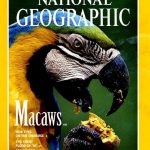