The Eternal Treasure, Gold { Gold, the Eternal Treasure}
Intrigued by a rise in the price of gold, the author investigates its properties, processing, historical uses, and alluring appeal.
How to Catch a Passing Comet
The projected path of the new comet Kohoutek from late December 1973 until late February 1974 is portrayed. Directions are given for photographing the passing comet.
The People of New Jersey’s Pine Barrens
In the most densely populated state in the U. S. lies a sand- and- marsh wilderness where a smattering of people have learned to live off the land.
No Place to Run: The Hmong of Laos { The Hmong of Laos: No Place to Run}
Crack guerrillas working for the U. S. in the Vietnam War, these mountaineers were driven from their villages by war and many ended up in communist- held territory.
Aha! It Really Works!
A tool- using bird? A green heron at the Miami Seaquarium drops fish- food pellets into the water to lure small fish for its dinner.
Newfoundland Trusts in the Sea
Joined with Labrador to become Canada’s youngest province in 1949, this Atlantic island remains an isolated region, almost entirely dependent on the fishing industry.

Be the first to review “National Geographic January 1974” Cancel reply 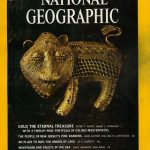