The United States Capitol: Under the Dome of Freedom { Under the Dome of Freedom: The United States Capitol}
The United States Capitol is more than a house of lawmakers; it’s a museum, an art gallery, a historical showplace, and the beating heart of America’s democracy.
Mount Sinai’s Holy Treasures
A fabulous collection of early Christian art, including precious icons that survived eighth- century purges, survives at St. Catherine’s Monastery in the Sinai.
Island of Faith in the Sinai Wilderness
St. Catherine’s Monastery, built 14 centuries ago to hallow the traditional place where God spoke to Moses from the burning bush, shelters a unique collection of Christianity’s early art and living remnants of Byzantine culture.
To the Memory of Our Beloved President, Friend to All Mankind
With the death of President Kennedy, the world has lost a leader dedicated to peace, justice, and understanding.
Photographing the Night Creatures of Alligator Reef
Graduate students pioneer night diving and find Alligator Reef, Florida, a very different place after dark.
The Nation’s Capitol Revealed as Never Before
Senator Carl Hayden, a veteran of 52 years in Congress, introduces a comprehensive guide to the Capitol of the United States produced by the National Geographic Society and the U. S. Capitol Historical Society.
Return to Lonely Tristan da Cunha { Home to Lonely Tristan da Cunha}
The citizens of this remote island return and resume their simple lives after an 18 month exile imposed by a volcanic eruption.

Be the first to review “National Geographic January 1964” Cancel reply 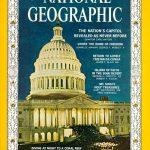