Pennsylvania Avenue, Route of Presidents: Landmarks and Shrines of United States History Line the Path of Inaugural Parades from Capitol to White House
A stroll down the nation’s main street takes walkers past monuments to art, history, and politics.
The Great St. Bernard Hospice Today: High in the Swiss Alps, Devoted Monks Carry On Labors of Mercy amid Snow and Silence, Still Helped by Lifesaving Dogs
Monks and their legendary canine friends still rescue the occasional traveler from alpine storms and avalanches.
An Engineer’s View of the Suez Canal: Without Constant Dredging, This Vital Waterway Would Fill with Sand and Be Reclaimed by the Desert
The dredger’s work is never done on this waterway constantly plagued with eroding banks and tons of windblown desert sand.
On Australia’s Coral Ramparts: An American Naturalist Explores the Wonders of the Great Barrier Reef and Meets Its Denizens- -Some Friendly, Some Not, but All Fascinating
A naturalist examines myriad creatures on and around the Great Barrier Reef, from the tiny architects of the reef itself to stonefish, sea wasps, and giant clams.
Norway’s Fjords Pit Men Against Mountains: Proud and Steadfast People Cherish Hard- won Living Space Where the Sea Thrusts Arms Deep into a Rugged Land
Hardy Norwegians carve out a living on the treacherously steep slopes of this glacier- hewn landscape.

Be the first to review “National Geographic January 1957” Cancel reply 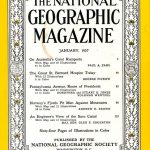