Man’s Farthest Aloft: Rising to 13. 71 Miles, the National Geographic Society- U. S. Army Stratosphere Expedition Gathers Scientific Data at Record Altitude
In November 1935 the Explorer II balloon, toting a spectrograph to record atmospheric data, set an altitude record of 72, 395 feet, more than 13 miles high.
The National Geographic Society and Its Magazine
Since NATIONAL GEOGRAPHIC magazine began in 1888, it has adhered to guiding principles of accuracy and instruction, sponsored historic expeditions, and increased its members from 165 to one million.
Birds of the Northern Seas
Distant Tigalda Island of the Aleutians is one of many popular havens for thousands of birds found only in the Northern Hemisphere, including 19 species of auks, murres, and puffins.
With the Nomads of Central Asia: A Summer’s Sojourn in the Tekes Valley, Plateau Paradise of Mongol and Turkic Tribes
In the remote Tekes Valley of Sinkiang, near the Russian border, clusters of hardworking nomads live in yurts and pasture their land.

Be the first to review “National Geographic January 1936” Cancel reply 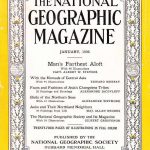