European Outpost: The Azores
Nine volcanic islands 955 miles from Europe, the self- sufficient Azores were settled in the 15th century by Portugal and have been a stepping- stone in the Atlantic Ocean for Columbus, transatlantic aviators, and the American military.
England’s Sun Trap Isle of Wight
Sheltering England’s port of Southampton like a cork in the harbor, the Isle of Wight is a yachting center and home to sturdy, independent people who have hosted English authors like Keats and Tennyson.
Where the Sailing Ship Survives
Nestled between Sweden and Finland in the northern Baltic Sea, a collection of 6, 554 islands and rocks known as Aland is a haven for old, square- rigged sailing ships.
Life’s Pattern on the Italian Riviera
Tiny towns cling to hillsides along Italy’s Mediterranean coast, a region between the Piedmont and the sea where friendly Italians celebrate provincial life.

Be the first to review “National Geographic January 1935” Cancel reply 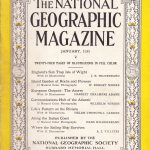