Crows, Magpies, and Jays: Unusual Intelligence Has Earned a Unique Position For These Birds
Smarter than the average bird, the raven and its cousins figure in the folklore of many cultures as gods, messengers, and symbols but have been held in less regard in recent times.
Montserrat, Spain’s Mountain Shrine
Home to a Benedictine monastery since A. D. 976, Montserrat clings to the face of a stone pinnacle in the foothills of Catalonia.
Air Adventures in Peru: Cruising Among Andean Peaks, Pilots and Cameramen Discover Wondrous Works of an Ancient People
An expedition launched by a former Peruvian Naval Air Service photographer traces the Great Wall of Peru, and documents other prehistoric ruins.
When Czechoslovakia Puts a Falcon Feather in Its Cap
Combining athletic competitions, mass drills, and grand parades, the ninth Pan- Sokol festival of Czechoslovakia honors Dr. Miroslav Tyrs, who began a movement to cultivate healthy minds and bodies in the spirit of the original Olympic Games.
The Cape Horn Grain- Ship Race: The Gallant Parma Leads the Vanishing Fleet of Square- Riggers Through Raging Gales and Irksome Calms 16, 000 Miles, from Australia to England
A field of 20 windjammers competes in a dangerous voyage to bring Australian wheat to British harbors.

Be the first to review “National Geographic January 1933” Cancel reply 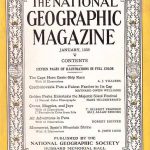