Bird Banding, the Telltale of Migratory Flight: A Modern Method of Learning the Flight- Ways and Habits of Birds
Now a recognized line of research, the systematic banding of birds to track their migrations is painless to the birds and valuable to scientists.
Seeing America With Lindbergh: The Record of a Tour of More Than 20, 000 Miles by Airplane Through Forty- eight States on Schedule Time
Adhering to a strict schedule for 260 flying hours, the equivalent of 11 days, Col. Charles Lindbergh zigzags across the continental U. S. in a tour designed to stimulate interest in commercial airline travel.
President Coolidge Bestows Lindbergh Award: The National Geographic Society’s Hubbard Medal Is Presented to Aviator Before the Most Notable Gathering in the History of Washington
The NATIONAL GEOGRAPHIC magazine prints some of the speeches made at the November 14, 1927, ceremony honoring Charles Lindbergh with the Hubbard Medal in recognition of his transatlantic flight.
Dalmatian Days: Coasting Along Debatable Shores Where Latin and Slav Meet
The author traces the eastern shoreline of the Adriatic Sea by rail and water, exploring endless indentations and describing the people who live there.

Be the first to review “National Geographic January 1928” Cancel reply 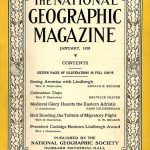