To Live in Harlem. ..
Recording both the delights and the agonies, two skilled journalists capture an insiders’ view of the nation’s best- known black community. By Frank Hercules and LeRoy Woodson, Jr.
The Longest Manned Balloon Flight
Fickle winds cheated Ed Yost of the big prize – – first across the Atlantic by balloon – – but not before he had set eight new world records.
Audubon On the Wing
Self- taught in art and science, the footloose son of a French sea captain wins immortality as a master painter of North America’s birds. David Jeffery and Bates Littlehales follow the career of John James Audubon.
The Pageant of Rajasthan
Raghubir Singh returns to the legend- haunted land of his birth, and finds it still throbbing with the flavor and color of traditional India.
The Ohio- -River With a Job to Do
Signing on as a peanut vendor, towboatman, tobacco cutter, coal- terminal hand, and distillery worker, Priit J. Vesilind samples life along one of America’s busiest and most vital waterways. Photographs by Martin Rogers.
New Microscopes Reveal an Invisible World { Voyage Through an Invisible World; Electronic Voyage Through an Invisible World}
Science editor Kenneth F. Weaver reports on microscopes that substitute electrons and atoms for visible light. Now scientists study the structure of molecules and tiny organisms, which once could only be imagined.

Be the first to review “National Geographic February 1977” Cancel reply 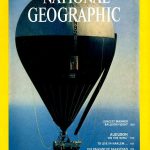