Ecuador- -Low and Lofty Land Astride the Equator
The small South American nation that extends from the icy flanks of the Andes to Amazonian jungle, coastal desert, and the Galapagos archipelago, is peopled by Indians, descendants of African slaves, mestizos, and Spaniards.
Czechoslovakia: The Dream and the Reality
After nearly two decades of communist rule, this landlocked industrial nation grapples with the realities of mismanagement, central control, and an absence of freedom.
Our Growing Interstate Highway System
Crisscrossing America with high- speed, divided highways, the Interstate Highway System creates a 41, 000- mile network that spurs travel and rearranges local communities and lives.
Sharks: Wolves of the Sea
As encounters between humans and sharks increase, scientists respond with studies of the fish’s physical characteristics, abilities, and habits, while photographers take risks to capture underwater action on film.

Be the first to review “National Geographic February 1968” Cancel reply 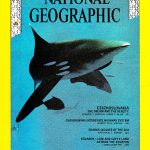