Exploring Antarctica’s Phantom Coast
U. S. Navy icebreakers ram their way farther into the Belllingshausen Sea than have any previous ship.
Tracking America’s Man in Orbit
Sixteen stations across the globe monitor everything from flight path and altitude, to the astronaut’s vital signs.
North Carolina, Dixie Dynamo
One of the nation’s oldest states embraces young technologies, especially in the region dubbed Research Triangle.
Dalmatian Coast, Yugoslavia’s Window on the Adriatic { Yugoslavia’s Window on the Adriatic}
A new road being built along the Dalmatian coast proceeds much like the country’s economy – – the slow but steady product of hard work.
Roseate Spoonbills, Radiant Birds of the Gulf Coast
In Texas, Louisiana, and Florida, a beautiful tropical bird makes a comeback from the devastating plumage trade that nearly erased the species from the U. S. landscape some 50 years ago.

Be the first to review “National Geographic February 1962” Cancel reply 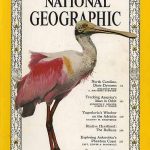