Changing Berlin
Site of the 1936 Summer Olympics, the capital city of Berlin, draped with Nazi banners, is modernizing and turning away from traditional architecture.
We Escape from Madrid
Caught in the Spanish revolt of July 1936, an American woman studying in Madrid struggles to reach safety amid bombs, wreckage, and bullets.
North About
An expedition sails from Singapore to Sydney in one of the last square- rigged ships, the 55- year- old Joseph Conrad, exploring exotic islands along the way.
Denizens of Our Warm Atlantic Waters
Sailing in the Gulf Stream of the Atlantic Ocean, a marine biologist explores the world of sponges, jellyfish, lobsters, crayfish, oysters, crabs, and sea urchins.
Observing an Eclipse in Asiatic Russia
An expedition to Russia captures a rare color image of a total solar eclipse on June 19, 1936.

Be the first to review “National Geographic February 1937” Cancel reply 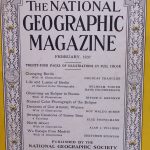