The French Mandate of Cameroun { The Mandate of Cameroun: A Vast African Territory Ruled by Petty Sultans Under French Sway}
Although the vast area was ceded to France after World War I, life in the Cameroun ( Cameroon) region of West Africa moves to its own rhythm under the control of local potentates.
Albania, Europe’s Newest Kingdom { Europe’s Newest Kingdom: After Centuries of Struggle, Albania at Last Enjoys an Era of Peace and Stability}
Leaping from medievalism to modernism in the space of a decade, Albanians trade donkeys for cars on paved highways and build additional schools to combat widespread illiteracy.
Rounding the Horn in a Windjammer
Seeking to film the old- time sea route around Cape Horn in a full- rigged sailing ship, the author embarks on a voyage of suffering and calamity that includes raging storms, a critical food shortage, and the death of a shipmate.

Be the first to review “National Geographic February 1931” Cancel reply 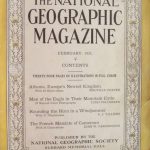