The White City of Algiers
Once the haunt of Mediterranean pirates, Algiers has grown into a vibrant outpost of French colonialism.
The Warfare of the Jungle Folk: Campaigning Against Tigers, Elephants, and Other Wild Animals in Northern Siam
A year spent observing wildlife in Siam ( Thailand) and the people who hunt there opens a window onto jungle folklore.
Around the World in the Islander : A Narrative of the Adventures of a Solitary Voyager on His Four- Year Cruise in a Thirty- Four- Foot Sailing Craft
A sailor describes his four- year journey circumnavigating the globe from the launch in California through the South Seas, the Indian Ocean, around the Cape of Good Hope, and through the Panama Canal.

Be the first to review “National Geographic February 1928” Cancel reply 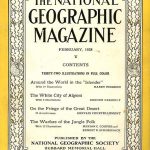