Animals at Play
Tickling and wrestling, toying with sticks and tires, animals young and old play together and by themselves. Such behavior appears crucial to normal development. Could it also be just pure fun?
C. S. S. [ Alabama] { The Wreck of the C. S. S. [ Alabama] : Avenging Angel of the Confederacy}
The Confederate raider Alabama seized or burned 64 United States merchantmen before succumbing to a Union warship off France in 1864. Now a U. S. -French salvage team pieces together her story.
Buenos Aires- -Making Up for Lost Time
Birthplace of tango, Argentina’s largest city counts 11 million people – – a third of the nation. Recovering from economic missteps, they dance to the healthy beat of free enterprise.
Canada’s Highway of Steel
The rails that stitched a nation together still haul its grain and keep its commercial heart beating. A double supplement map focuses on the Prairie Provinces.
America’s Poet: Walt Whitman
Celebrating the ordinary and the exalted, the scared and the sensual, this beloved 19th- century individualist still stands as an unabashed prophet of joy.

Be the first to review “National Geographic December 1994” Cancel reply 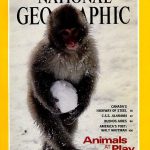