Australia’s Feathered Playboy { The Satin Bowerbird, Australia’s Feathered Playboy}
What bird steals blue clothespins, builds an ingenious hideaway with painted walls to attract as many as half a dozen mates, and then shrugs off all the responsibilities of parenthood? Picture story by Philip Green.
The Voyage of Brendan — Did Irish Monks Discover America? { The Voyage of Brendan }
Timothy Severin and a daring crew add a new dimension to an old controversy: Could Irish monks in a leather boat have reached North America nine centuries before Columbus’s world- changing voyages?
Who Discovered America? A New Look at an Old Question
Giving up their centuries- old cargoes at last, drowned ships yield fresh insights into the settling of the Americas. Historian Mendel Peterson tells the story, with photographs by David L. Arnold and paintings by Richard Schlecht.
Reach for the New World
Drowned ships yield fresh insights into the settling of the Americas.
The Year the Weather Went Wild
Braving blizzard and heat wave, drought and downpour, Thomas Y. Canby and a team of photographers examine the causes and consequences of 1976- 77’s record- breaking tantrums.
Japan’s Amazing Inland Sea
Sleepy villages and a vast national park somehow coexist alongside southern Japan’s throbbing factories and busy shipyards. By William S. Ellis and James L. Stanfield.

Be the first to review “National Geographic December 1977” Cancel reply 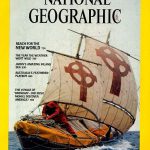