Pilgrims Follow the Christmas Star
In the days before Christmas, Israel and Jordan cease their hostilities to allow Christian pilgrims access to the holy sites of the Nativity. Followers of three different religions, the peoples of the Holy Land are learning to live together.
Bhutan, Land of the Thunder Dragon
Bhutan, high in the Himalaya mountains, is not often visited by Westerners. Tucked away between India and Tibet, Bhutan offers dramatic scenery and climate.
Hashemite Jordan, Arab Heartland: Old and New Ways Meet and Mingle in the Modern Moslem Nation Which Contains Some of Christianity’s Most Sacred Shrines
Carved from the remains of the Ottoman Empire and ruled by King Hussein, this modern Arab state shares a border with Israel and contains the ruins of some of Christianity’s most sacred shrines.
La Jolla, a Gem of the California Coast: To Its 10, 000 Inhabitants and Myriads of Visitors, This Sunny Corner of the Golden State Is Paradise on the Pacific
Its name means the jewel in Spanish, and this little cove on the Pacific Ocean lives up to its name.
Boom Time in Kuwait: An Obscure Persian Gulf Sheikdom, Enriched by Oil, Uses Its Wealth to Improve the Lot of All Its People
An obscure Persian Gulf sheikdom uses its new- found oil wealth to improve the lives of its inhabitants.
Grass- skirted Yap: War Made Uncle Sam Foster Parent to These Far Pacific Islanders, Who Prize Old Ways, Taboos, and Huge Disks of Stone Money
In the aftermath of World War II, the United States finds itself the guardian of the Yap Islands, between Guam and Palau. The natives still honor their ancient traditions and taboos, in spite of modern- day encroachments.

Be the first to review “National Geographic December 1952” Cancel reply 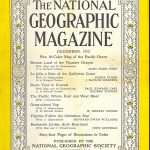