Where Bible Characters Live Again: Everyday Life in Oberammergau, World Famous for Its Passion Play, Reaches a Climax at Christmas
The German village of Oberammergau, nestled in the Bavarian Alps, devotes itself to its decennial all- day performance of the life and death of Christ.
Capital Cities of Australia
Almost half of Australia’s seven million people live in its six state capital cities, each with its own unique character.
The Rock of Aden: The Volcanic Mountain Fortress, on the Sea Route from Suez to India, Assumes New Importance
Though an extinct volcano, barren Aden is crucial to Britain because of its strategic location at the mouth of the Red Sea, halfway between Egypt and India.
Horace- -Classic Poet of the Countryside
From Rome to the hill country of Venosa, Italy is speckled with traces of the classical poet.

Be the first to review “National Geographic December 1935” Cancel reply 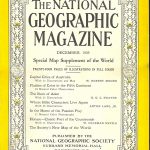