Among the Shepherds of Bethlehem { Among the Bethlehem Shepherds: A Visit to the Valley Which David Probably Recalled When He Wrote the Twenty- third Psalm}
Shepherd families of Palestine live much as their ancestors did; often the youngest boy tends the sheep, with flute and staff in hand.
Exploring the Earth’s Stratosphere: The Holder of the American Altitude Record Describes His Experiences in Reaching the Ceiling of His Plane at an Elevation of Nearly Eight Miles
In the interest of advancing U. S. military air strength, First Lt. John A. Macready completes a series of high- altitude flight studies, a feat requiring the latest equipment and the greatest stamina.
Skirting the Shores of Sunrise: Seeking and Finding The Levant in a Journey by Steamer, Motor- Car, and Train from Constantinople to Port Said
A quartet of adventurers sets off to explore a region historically known as the Levant – – lands that form a crescent around the eastern half of the Mediterranean Sea including Turkey, Syria, and Palestine.

Be the first to review “National Geographic December 1926” Cancel reply 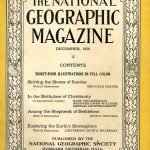