Where Adam and Eve Lived
Baghdad, magical and romantic city of the Arabian Nights, was once a center of the world’s wealth, power, and civilization. The city is reborn as the center of an international battle for political and commercial supremacy in the Middle East.
Impressions of Asiatic Turkey
The author shares his impressions of Turkey and its people after five years of touring the provinces of Aleppo and Adena by horseback.
Mystic Nedjef, the Shia Mecca: A Visit to One of the Strangest Cities in the World
Five days by mule or camel from Baghdad, this mysterious desert city of golden domes, fabulous treasures, and weird rites attracts Shiite pilgrims from India, Persia, and southern Russia. They bring with them their mummified dead – – salted and dried – –
The Most Historic Lands on Earth
Though the Turks possess a territory only a third the size of the United States, within their boundaries some of the greatest, most influential events in human history have occurred – – from those of Babylon to the Promised Land, and to the civilizations
Life in Constantinople
This great city has changed more in the past five years than in all the 200 years prior. Nevertheless the atmosphere of this agglomeration of races, this sometimes uneasy mixture of East and West, retains more than just a tang of the medieval.
Henry Gannett, President of the National Geographical Society, Biography of { Henry Gannett}
Upon the death of its president, a founding member, the National Geographic Society honors this father of Government map making in the United States.

Be the first to review “National Geographic December 1914” Cancel reply 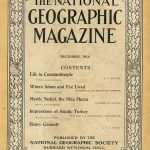